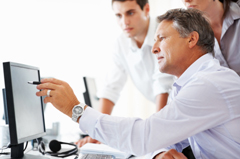 What do you do when you are suddenly without your CFO or Controller?

You don’t need to forgo essential everyday operations or make hasty hiring decisions. We are poised to quickly step in to become your interim CFO or interim Controller and meld into your corporate culture while providing the solid, steady financial expertise you can’t afford to go without for even a short duration.

Unlike a conventional staffing firm which acts as an agency and contracts with a person they interviewed, Sutker Morans’ “Team Approach” takes out the uncertainty of the quality of the individual you will receive and matches you with an established firm member who will have the vast financial expertise, experience and support of Sutker Moran behind them.

Case Study: Stepping in to Ensure a Successful Transition

The Chief Financial Officer of a $40 million Plastic Fabrication Company resigned in the midst of its sale to a strategic buyer. The accounting staff and the president had limited knowledge of the inner workings of the financial department.

Sutker Moran was hired and immediately took over the position. Sutker instantly plugged itself into the Company’s cash situation to ensure vendors were being paid timely, especially critical given the impending ownership change. Simultaneously, Sutker began to finalize year-end financials which included developing a monthly close process for the accounting team. Sutker took the lead in navigating the due diligence period with the prospective buyer. Finally, Sutker seamlessly transitioned its responsibilities to the CFO of the buyer.

Case Study: A Revolving Door Leads to an Interim, then a Permanent Solution to Company’s Financial Management

A $100 Million multi-entity Construction Company found themselves yet again in need of a Controller. Their current Controller, in the role for only four months, quit. This was their fourth head change in the seat in just two years. The financial statements were in disarray, complicated by a general ledger system upgrade that was in progress.

Referred in by a friendly competitor of the Company, Sutker Moran took over the CFO/Controller role providing full-coverage CFO/Controller services at significantly less cost than a W2 employee. Sutker simultaneously reconciled every balance sheet account while developing and implementing a formal monthly close process. Sutker then focused on the Company’s convoluted WIP projection process. Sutker Advisors, first, gained a thorough understanding of the existing process. Then, teamed with the Senior Management Team to reimagine a new formal process tailor-made for the Company’s operations. Armed with meaningful information, Sutker Moran, as the Company’s CFO/Controller, challenges project managers with cost issues and helps identify operational under-performance.

A highly successful $100 million IT-based solutions provider urgently needed an interim Controller after the permanent Controller and the Company suddenly parted ways. The Company was in the midst of discussions with various private equity groups regarding a partial sale, switching banks, an upcoming annual audit beginning, as well as an ERP conversion.

Referred by the Company’s lender, Sutker Moran was hired (or as the Company’s owner referred to Sutker as “The Calvary”) as the interim Controller to facilitate the audit as well as manage the accounting staff. Sutker, first, corrected the financial statements. Then, Sutker successfully managed the Company through the audit process. Impressed with Sutker’s responsiveness and quality of work, the Owner ended his search for a W2 employee and hired Sutker full-time. Sutker now provides full-coverage CFO/Controller services at significantly less cost than a W2 employee, that started with the bank transition, managing the ERP conversion, as well as performing all financial duties related to the partial sale.

$30 million distributor to the Construction Industry

The Controller for a $30 million distributor gave her two-week notice. The following day the owner called his lender for advice. The Lender recommended Sutker Moran. That next day, he gave us a call to hear what we were all about. The following day, he called us back and asked if we can sit with the ongoing Controller to assess the position. We went there the next day, which was already Friday!

We are experts in financial management. So, we told the owner there was nothing out of the ordinary and quoted him a fee which was substantially less than the cost of his W2 employee.

Skeptical about our permanent outsourced model, he hired us as the temporary controller where we onboarded the position for the one week the outgoing Controller had remaining. Proving our model, we, now, are the permanent Controller providing timely and accurate financial statements, managing the staff, and addressing accounting issues as they arise.

The CFO of a home décor company left soon after the Company’s controller retired, leaving a large void in the financial/accounting department. Sutker Moran took on a leadership role, quickly assessing and understanding the Company’s financial systems and operations. As a result, the accounting department continued without disruption. Sutker Moran generated timely and accurate financial statements and identified areas for profit enhancement. Showing its value, Sutker became the Company's permanent CFO/Controller.

An engineering-based, construction-related firm had a really bad year due to poor non-core investments and excess overhead as anticipated revenue did not materialize. On its own, the Company shed the investments and right-sized its operations to match its anticipated revenue. However, their lender, already adverse to construction-related companies, no longer wanted to bank them. Furthermore, their Controller resigned during this period.

Sutker took on the interim Controller tasks. Sutker also developed a comprehensive refinancing package that including a detailed financial analysis showing the Company’s path from an unprofitable year to its projected profitable year, as well as presented their upcoming working capital needs. Confident about the credibility of the Company’s plan, Sutker reached out to several lenders who were not averse to the construction industry as well as whose customer base and culture matched that of the Company.  Sutker negotiated the lending agreement with the new lender on behalf of the Company.

Sutker became the outside CFO for a flourishing construction company, instilling processes and developing analysis that helped the owner and management team manage the Company’s growth. As the Company expanded vertically and horizontally, more financial management was needed.

Sutker sought and identified a full-time CFO and transitioned into a more business advisory position.

Want to learn how Sutker Moran can help improve your profitability?